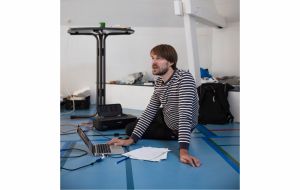 Nico Boon is a teacher, writer and theatre maker. At LUCA School of Arts, Leuven, he coordinates the new master’s programme ‘Writing For Performance’ which has a clear emphasis on writing. In his doctoral research Nico investigates contemporary theatre writing.

In his theatre work Nico has been opting for a (more) intimate approach by performing his self written pieces. This choice has been proven successful as Komt op/Gaat af was nominated in 2019 for the Taalunie Toneelschrijfprijs, an important Flemish-Dutch prize for new theatre texts. Later, it also received the Eurodram Award for the German translation.

He is one of the driving forces behind De Leesclub (The Reading Club), an expanding group of theatre text enthusiasts who read and analyse various theatre texts. The participants come from both outside and inside the cultural sector and together form a nice mix of experts and amateurs.

The collaboration with Vincent Company continues until end 2022.