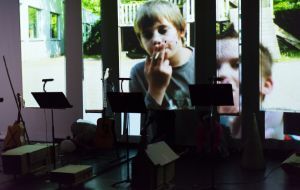 All of their performances originate in the world in which they live -outside of the safe environment of the theatre- out of something that touches them. Recent sources of inspiration have been: the demolition of a social housing block, the euthanasia of a friend or family member, the death of an 18-year old in a tent in a park, a drawer in which you can leave your newborn child. As such, Lucinda Ra searches for a way to cope with the harsh reality drawn by today’s society.

They often take multiple years to submerge themselves into the topics. Through meetings, events and interviews they collect the material necessary for their story. The result is an experience which cuts to the bone. They don’t want to judge but instead draw conclusions.

Lucinda Ra balances on the border between chaos, fantasy and genius. They cherish the gift of life even though it’s ruthless.

In 2023-2024, Barbara Claes reprises the performance Jordy.
Stefanie Claes reprises Mia Kermis and will premiere with Ravensbrück (25-28 October , De Studio, Antwerpe).
The collaboration with Simon Allemeersch continues until end 2022.
Do not hesitate to contact us if you want more information about these productions.