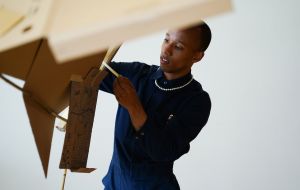 Samuel Baidoo is a choreographer, dancer and graphic designer. He/She/They work(s) from their own practice, but also create(s) commisioned performances and is/are one of the artistic leader from the art collective Hanafubuki. In recent years Samuel has collaborated with, among others, Guy Cassiers, Maud Lepladec, Yves Thuwis, Michiel Vandevelde, Nat Gras, Agostina d'Alessandra, toutpetit and Tuur Marinus.

This diversity of work is ideal for figuring out each time how freely they can deal with a variety of working forms. For them, each creative process starts with the creation of a new archive full of images, snippets of text, film stills, documentaries, pieces of music or excerpts from popular culture such as manga, series or films.

That archiving exposes the content that further engages them. In this way, Samuel associates and connects with their audience of children, families and/or (young) adults. Looking at their own work and world around them from changing perspectives keeps them on their toes. Collaborations are the basis of the joy and deepening of Samuel's dancing visual work.

Samuel finds joy in watermelons, bright colours, stereotypical breaking representations of minority groups in popular culture and late-night chats with friends. They strive for an inclusive and accessible arts field.